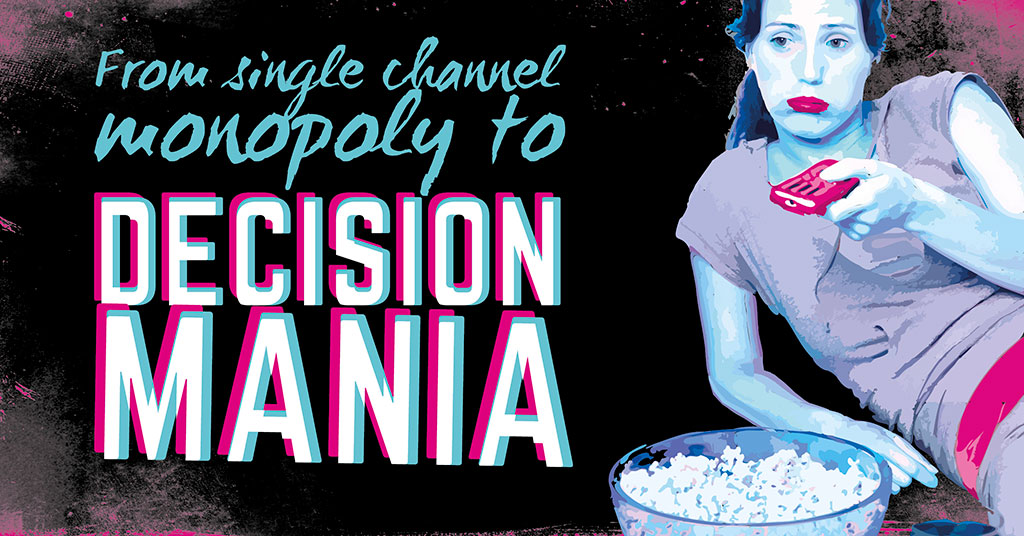 The rise in decision-making

TV used to be simple. At the very beginning, TV was only one channel. The only decision needed was to turn the TV on or keep it off. Once turned on, the only thing to do was to lean back and enjoy the show until it was time to turn it off again. The natural downside of this was that you had to plan your evenings according to the broadcaster’s schedule. The opportunity to choose what to watch, according to your interests or preferences, was slim to none.

When we got our second channel in Sweden, we saw a small triangle appear in the corner of the screen when something new started on the other channel. A few years after the introduction of the little reminder-triangle, we had more channels than we could possibly watch. Different bundles of channels were created and later, à la carte packages were introduced where you could select a few favorite channels to subscribe to.

Over time, as more channels appeared in the program guides, ‘zapping’ became a pretty common way to waste a few hours traversing the 100+ channel lineup, hunting for something that might be worth watching. New decisions were needed: should I go up, down or stay?

‘Cord-cutting’ was predicted and soon all of us would start abandoning traditional television. Since then, the market has been flooded with new streaming services, giving us a plethora of movies and series to watch. Could this be the nirvana of television? Or are streaming services overwhelming their audiences with too much content and therefore, too much decision-making?

When there was only one TV channel, decision-making was minimal as a scheduled curated stream required limited interference from the viewer. Today, the technology has enabled new formats like Netflix’s Black Mirror: Bandersnatch, where the viewer is prompted to make decisions even within the content, playing a role in the story. Decision-making while watching TV – a once leisurely activity to fully ‘switch off’ – has grown exponentially. Is it possible to deliver a ‘lean-back’ viewing experience in today’s TV landscape?

Is there a compromise?

While video content can be used to support several different business models – from SVoD to pay-per-view – what they all have in common is their foundation for monetization. It is based on reaching viewers and getting them to consume the content. For the ad-funded business models, the viewers and their viewing patterns make up the inventory that in turn, can be converted into money.

For subscription-based models, you need people to spend time using your service in order to attract subscribers and make them stay. The importance of having relevant content in order to win viewers’ attention just got more concrete than ever when Netflix turned on the auto-cancelling of dormant accounts, well aware that the long-term value of a good and fair relation is worth more than a few extra months of subscription from a customer who really is taking a break.

As the internet, at least technically, provides all streaming service providers with global reach, it all comes down to being relevant in order to stand out. Enabling the user to view exactly what they want at the time and place desired is, of course, the ultimate receipt of relevance. However, if the process getting the stream started is too long and complex due to content overload, there is a good chance the viewer’s attention is lost even before the first frame is rendered.

Can you deliver a lean-back curated experience that is adapted to your viewer’s preferences and interest, thus minimizing their decision-making? Or give them more value out of their favorite live content by extending the event with personally-curated content prior to the event and after? ‘Padding’ content can extend live events to a longer entertainment session. This will not only avoid the peak sign-in just before the event start, it will increase the value of the event and add inventory minutes.

The playlists within music streaming services speak for themselves (e.g. Discovery Weekly on Spotify). It’s often satisfying to get curated content served to you, without the need to proactively discover it.

There is not a one-size-fits-all way to watch television. Different users have different preferences. But it also depends on context and mood. Sometimes you want to take part in the story and other times, you just turn it on as background company.

Today’s technology enables lean-back viewing experiences, such as creating virtual dynamic linear type channels out of already transcoded and prepared video content. So, if you as a content provider sit on a great catalogue of content, virtual dynamic channels are a great way to further utilize your content and give your customers a great experience.

From personal playlists and playlists created by influencers to regional channels, thematic channels and news channels, the possibilities are endless to ease ‘decision mania’.

Now read the second part of this blog where co-authors Magnus Svensson and Johan Bolin take a detailed look at what dynamic channels are, and how they can be used to generate additional ROI on content and deliver a great viewing experience.