The elephant in the room and the battle on the dancefloor 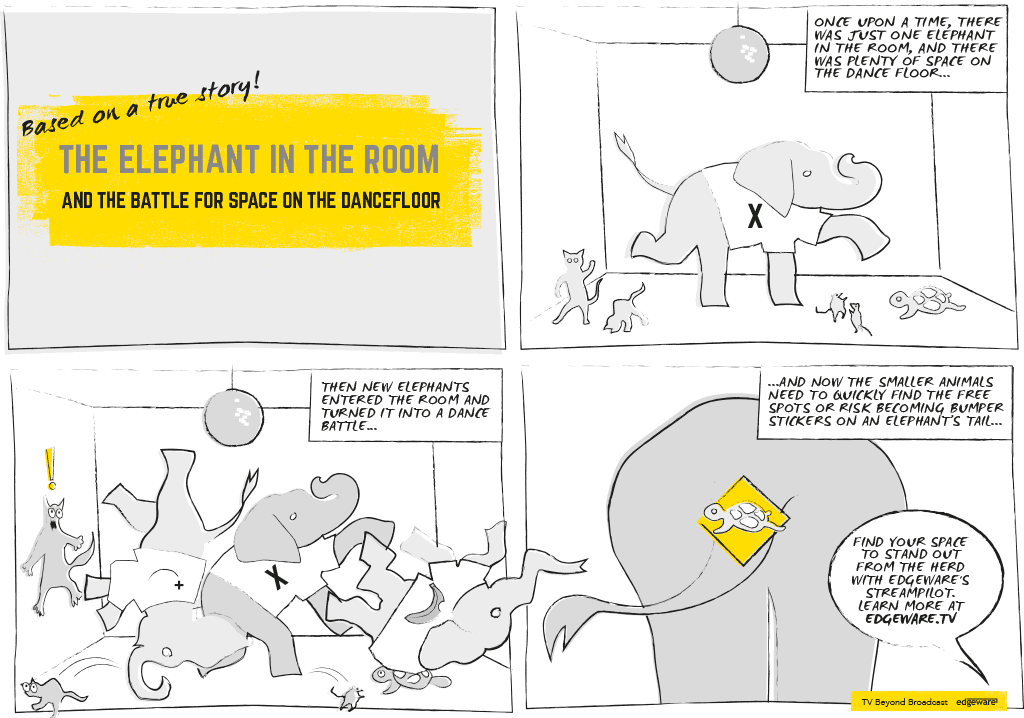 For a few years now, there has been an elephant in the room of the TV market, and that elephant is called Netflix. But it’s no longer just one elephant. Other heavyweights have also come along such as Amazon Prime and Hulu. Lately, and not missed by anyone, this small gang just got company from another couple of elephants.

During the last few months we’ve been bombarded with announcements from new elephants. Big global streaming TV providers such as Disney and AppleTV have been launching their streaming services bundled with attractive offerings including high profile TV series or popular device subscriptions. For example, Disney launching Star Wars series Mandalorian, and AppleTV bundling with an Apple device purchase. HBO Now and NBCs Peacock have announced their entry as well. So, now we have a herd of elephants!

As the room is getting more crowded, it is starting to turn into a noisy disco or club. So, when the non-elephants among us show up on Saturday night to pull off some slick streaming moves, surrounded by these not so slick elephants, you need to be fast and agile and you need to be able to navigate your way around the darkness and the smoke. Because if you’re not, it’s not only that you might have your toes stepped on. You risk becoming a bumper sticker on a shaking tail of an elephant. Being successful and impressing the audience is all about quickly identifying the free spaces and owning them. What am I trying to say here, you might ask?

Think of the room, the disco or the club as the internet. It consists of ISPs with access and core networks aggregating the traffic and interconnecting this with other ISP networks, using internet exchanges, transit or peering. Internet exchanges are relatively cheap but limited in capacity and best effort. Transit on the other hand offers guaranteed capacity, but at a high price for both parties. Peering can often be better but requires relationships and agreements between both parties and can be politically challenging to settle. This is how the internet started and how it is still today.

With the internet’s popularity growing, its symmetrical architecture didn’t fit well with the content intense services offered there, which have asymmetrical traffic flows. A click on a web page, such as starting a VOD stream, often renders a huge downstream traffic flow.

To manage this, CDNs were introduced as an overlay infrastructure compensating for the asymmetry. CDNs are essentially caches and streaming servers that moves content and bandwidth expansion closer to the user, resulting in infrastructure savings and a better user experience.

But, CDNs use the same means to get traffic into the ISPs as ISPs use to interconnect, meaning internet exchange, transit or peering. In some cases, they may also have servers hosted inside the ISP’s networks. A good example of the latter is Netflix, who’s Open Connect servers are hosted inside many ISP’s networks. As a matter of fact, most popular internet services today are delivered from CDNs and not from interconnected ISPs.

You can see the shared internet and the CDNs as a big dancefloor; the place where the show takes place and where stars are made.

The elephants of traffic

Video streaming represents a large portion of all traffic on the internet – often estimated to be some 80-85%. For a long time, Netflix has had an impressive share of this. With the increasing number of new streaming services, there will be even more video traffic originating from a handful of sources. This traffic will enter the ISPs through peering, some through transit and a little via internet exchanges from CDNs. In the ISPs the traffic from various services will be added to the video traffic from the hosted CDNs and share the same core networks on the way out to the users via the access networks.

In the end, the quality of the user experience will depend on aspects such as how crowded the CDN caches and streaming servers are, how and where the streams got into the ISP, the capacity of the core network, what kind of access network is used and how many users are sharing the same connection? Since all these big streaming services are relying on the same, to a large extent shared best-effort infrastructure, they will impact each other.

The elephants obviously count for the sizable traffic that these services represent on the internet. But what about the dancing? Why aren’t these animals just finding a spot and staying put?

Well, these giants are moving for a couple of reasons. One is simply that while these heavyweights might not have a problem with their size, they have a problem keeping it. The size of each elephant is constantly changing, depending on who has a popular show, if there is a local or global live event, or a Christmas campaign attracting a lot of new users. And they could also be moving to reduce their costs and/or to optimize the quality of experience (QoE). Finally, some moves are outside the intentions, e.g. when CDNs are reaching their capacity limits, traffic will be moved around to load balance across servers and interconnect interfaces.

And when this moving happens, you don’t want to be in the wrong spot.

Navigating in the dark and the smoke

If you want to be someone, you better be on the dance floor. Surrounded by the dancing elephants, the question is if you have the skills and tools to be successful? Do you have the tools in place to know if your users are suffering from availability or rebuffing issues, or are you waiting until you learn about your problems in social media?

If you have the tools, do you know if the problem is the CDN caches melting down, crowded peering interfaces or over loaded ISP networks? Do you have visibility to see if there are better routes for your streams to avoid the most crowded spots? Would moving to another CDN help out? If you can see this, do you have the means and skills to move?

In the next blog post, we will take a deeper look at the tools to use and some smart dance moves you should consider to give you the space you need to strut your stuff.

If you can’t wait, check out our StreamPilot.