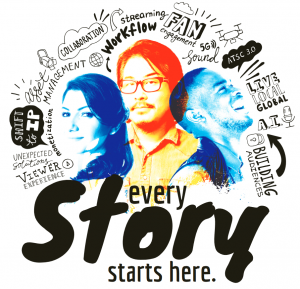 Edgeware and our newly acquired team from Cavena exhibited at the NAB Show in Las Vegas, Nevada in April this year. As well as giving us a great opportunity to meet with customers and prospects, the show invites those who are brave enough to try and discern broader trends that are emerging in our industry. The sense we came away with is that these two worlds of content production and distribution are going to be coming together, and there will be collateral damage along the way…

Edgeware is feeling brave, so let’s have a go at picking out some of the trends behind this!

The first thing to check is the NAB Show slogan, which in the past has centred on technically oriented topics such as 3D, Triple Play, 4K and so on. This year whilst a number of topics get minor billing, the main slogan is ”Every Story Starts Here.” Is this an attempt to broaden the relevance of NAB beyond the technology and tech business aspects that it has traditionally focused on?

Perhaps… but a stroll around the show and a review of the conference agenda indicates that it is more likely that NAB is focussing on media production and using this tagline as the hook around that space. Media production and the technology that supports it is a booming business, as investment in content has become the primary tool that the major media brands use to differentiate their offer in an increasingly direct to consumer industry.

Edgeware has more traditionally operated on the distribution side of our business. Distribution is already well advanced on a disruptive journey, similar to the one being experienced by our Content Production cousins. There were a number of ‘hot topics’ in our space that are worth mentioning.

Last year most of the OTT technology vendors pushed DASH-CMAF as the low latency technology, however this year a number of prominent members of the streaming community switched to their own solutions. For example THEOplayer launced HESP; Nanocosmos were promoting their own approach; Phoenix showed a low latency trivia gameshow based on their own technology; and Limelight were showcasing their webRTC based low latency streaming solution. On the other hand Bitmovin asked their customers if they plan to switch to CMAF during 2019 and 90% answered yes! What is clear is that low latency is fragmented and difficult to navigate… There is not yet a clear winner, if there will ever be.

Some companies are still talking about low latency as the next thing in streaming, but the landscape is fragmented and the commercial implementations small, usually targeting a specific use-case (for example video gambling, online casinos or trivia shows). To us that’s a warning – the complexity is high and the use cases dispersed. Edgeware believes that CMAF has the broadest role to play and continues to be where we focus.

As more media production and preparation workflows move to the cloud, more video has to be sent up there… so Cloud Ingest is a particularly hot topic. And the game is on. When the migration to a datacenter based production / distribution workflow is ongoing, media production companies need to get the source video data into, out of and moved between different datacenters.

Three protocol level technologies have surfaced as candidates to solve those challenges: SRT, RIST and Zixi. The protocol level ‘data carrier’ aspect is one part of the story, but not all. If you are moving large amounts of data around then you need some infrastructure built around your protocol to manage, monitor and bill for the carriage and support more advanced distribution use cases. Zixi as a private company with it’s own protocol has built a full solution wrapper around the protocol to facilitate that operation. Then during the last couple of months other protocols have been implemented in virtual overlay networks. One is being built by Haivision built on Azure and is named SRTHub. As an alternative approach, you can take a ‘platform in a box’ and run a media overlay network yourself, in the shape of ZEN Master.

The newcomer is RIST, a standard released recently which has no real infrastructure around it yet, however VLC and Gstreamer did manage to implement it in their players just before NAB.

The battle of the protocols will continue…

Software as a Service

When does a disruptive technology become the norm? In the case of SaaS applied to media production workflows, the latter has certainly now been attained. AWS, GCP and Azure were all prominent and very busy, and companies like make.tv, VITEC, Adobe, BlackBird + many many more are just confirming that this trend is todays reality and their products are 100% datacenter implemented. There is nothing to install anywhere, you need to know your credentials and access to internet trough a browser. Then you’re set to go.

Edgeware is a firm believer in this market and we have launched our own Edgeware Cloud Service to enable our customers to get rapid access to our market leading products on a SaaS basis, including TV Content Capture, TV Repackager, Ad Enabler, Virtual Channel Creation and Cavena OCR Subtitling.

The future of media production for most is overlay media networks, datacenter ingest / output technologies, and running your full production in the datacenter. Are we there yet? No… we are far far away from that, but the migration has started. And it is clearly the case that not everything will move (even though some people are claiming that it will).

As a final thought, it is possible to see a convergence between our two main universes of production and distribution. With increasing direct to consumer business models and vertical integration in our industry, this will only accelerate. At the same time, there is a cultural and language barrier between those two universes which is undeniable, and the companies that can tell that story and provide the answers will be well placed to flourish.

Edgeware and Cavena are a great example of two teams of people from each side of this spectrum coming together and starting to plan a new journey as these worlds collide. The Production and Distribution Convergence story is underway!